The Metropolitan Washington Airports Authority (MWAA), established in 1987 by the governments of Virginia and the District of Columbia, operates Ronald Reagan Washington National and Washington Dulles International airports, which together serve more than 47 million passengers a year.

After extensive research into various indoor air quality (IAQ) strategies, MWAA found recommendations from the American Society of Heating, Refrigerating and Air-Conditioning Engineers (ASHRAE) and the Centers for Disease Control and Prevention (CDC) for the use of UVC along with filtration and ventilation.

MWAA wanted to deploy UVC technology as part of their health and safety response to the COVID-19 pandemic at both locations to mitigate airborne transmission of pathogens.

MWAA wanted a proven air disinfection technology that would be effective in a facility with thousands of travelers each day with unknown pathogen exposure. UVGI has been used for well over 80 years for pathogen removal and it was decided upon by MWAA.

The primary areas of concern in an airport include ticketing, baggage claim, security checkpoints, transportation platforms, and gate hold rooms. 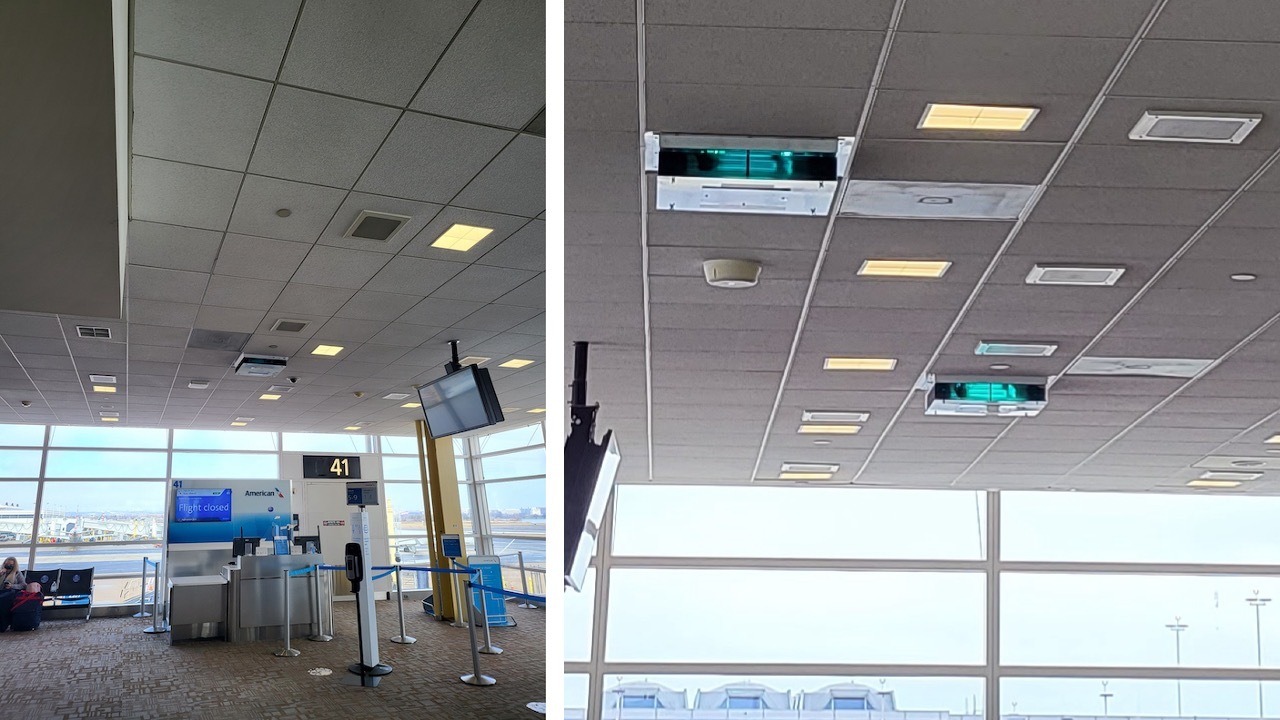 Lumalier’s upper-air CDU 2x2 series and wall mount fixtures were installed in several spaces including passenger waiting areas near the gates. Both airport facilities also installed UVC light fixtures in their air handlers to treat the air as it moves through the HVAC system.

Upper air fixtures were placed in all hold rooms, as these were determined to be the largest gathering areas of stationary people sitting in close contact. The upper room systems were installed to produce a layer of UVC above the occupants to disinfect pathogens as they move upward from the respiration of the occupants.

Each system was modeled using the latest software to produce an output model for disinfection, as well as meet NIOSH REL standards for eight hour exposure.

High level disinfection models were also created for each air handling unit (AHU). The disinfection values for moving air were studied to ensure that proficient air disinfection was being accomplished inside the AHUs. There is also the added benefit of improved energy efficiency with UVC lights helping to keep the coils

What was the result?

The products installed in the airports address air disinfection and are a component of a holistic approach to improve indoor air quality (IAQ). This includes appropriate air disinfection, ventilation, and filtration to help reduce the amount of airborne viruses, which mitigates the opportunity for spread.

Learn more about solutions for airports.